Since the last part in this series I have continued to conduct experiments comparing and contrasting the two variants of MLX90614, the wide field of view BAA and the considerably more focused BCF. Whilst undertaking these 'in the field' tests I have also come up against a few, what you might call, environmental problems which need addressing before I can move from the prototype phase to the implementation phase. 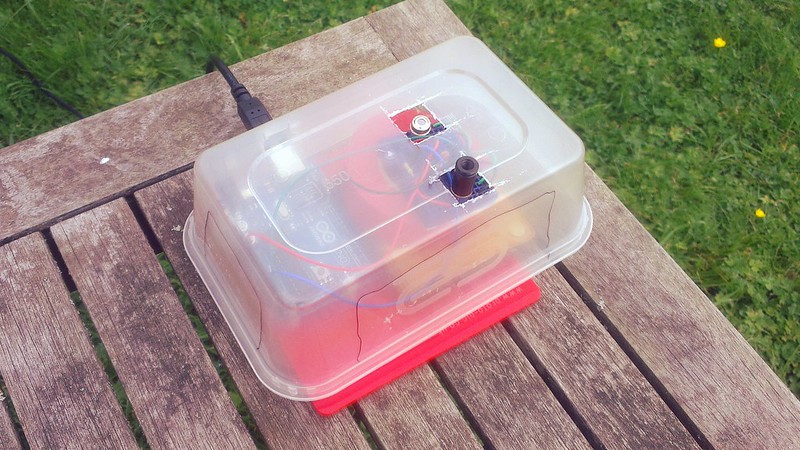 An Arduino has a day out in a box

So prototyping electronics within the pleasant warm and dry atmosphere, or 'in the lab' if you prefer, is one thing. However, placing your precious prototype out into the elements is rather another challenge altogether.

One major issue you will come across in these wonderful isles of the United Kingdom if you spend any time in the outdoors at night, particularly in the Autumn months, is high humidity and therefore plenty of dew settling on to surfaces, horizontal ones in particular.

The graph below produced by my weather station illustrates what happens to the relationship between dew point, air temperature and relative humidity over a couple of days.

Thankfully, there are a couple lessons which can be learned from the field of amateur observational astronomy; it can be a real battle to keep dew from forming on the mirrors and lenses of telescopes. Essentially there are two countermeasures available against dew in the outdoors: the application of heat or the application of airflow.

Heat
One method of preventing dew from forming is to ensure that the object in question is warmed to slightly above the dew point temperature. This is something that is often done with telescope mirrors to prevent them from misting up during the night. You may have seen this sort of thing in hotel rooms where a portion of a bathroom mirror is heated from behind to prevent condensation from forming while you are running the hot taps.
Airflow

Introducing a flow of air across an object can also be a successful method of preventing dew from forming, in conditions where the relative humidity is not too high. Bryan Greer mentions, in an article relating to fans on astronomical telescope optics, that

Perhaps this may be possible with the inclusion of a small 5 volt fan somewhere near the sensor.

Now these above lessons may be applicable to keeping the sensors clear of moisture. I'm going to have to experiment!

Another joy of living in these British Isles is the rain. There is rather a lot which for one makes this country fairly green and pleasant, but it does also mean that whatever you do with your precious electronics, you need to make sure that you package them in a decent water resistant package.

MLX90614 are, according to the data sheet, hermetically sealed but what does that actually mean in practice when it comes to dealing with potentially wet environments? The definition of something being hermetically sealed means that it is airtight; this does not mean that the seal is an effective barrier against water.

The data sheet makes no mention of any IP regulation (IP: Ingress Protection) weather proofing so I think that it would be prudent to keep it from the elements in some way. I do not want to have to be replacing these beasts too often as they are not the cheapest of components.

In the end I think that this all points to putting the sensor in some sort of housing that will shield it from the weather.

Final Reflection on Rain and Dew

After some thought I have decided that I do not want to leave things to chance: for me there is no question of having the sensor out in the open and pointing to the sky. This leaves only one option which is indirect observation of the sky via a reflective surface, keeping the sensor in the dry and only exposing a mirror of some sort to the sky.

Part 3 of the Cloud Detection series